All Folk’d Up looking toward their busiest, and biggest, year yet

All Folk’d Up looking toward their busiest, and biggest, year yet.

As the Tyrone folk-band gets ready to perform one of their biggest headline gigs of the year in the Empire Music Hall, Belfast – Rising Music Agency speaks to band member Pauric Mohan. Famed for his distinctive banjo sound, Pauric he looks back on All Folk’d Up’s year of 2019.

“This has been one of our busiest years in the band. We are just back on home soil for Christmas after our stint in the Mandalay Bay Hotel, Las Vegas. That gig is getting bigger for us every year now”. The band were approached two years ago after being scouted at one of their live shows. They were handpicked for a second year running to entertain in the world famous resort.

“But it’s exciting for us to come back home and see our fanbase building from all ages. We see many familiar faces in the crowds at our gigs here. We appreciate that so much. For us, it’s all about the live music. To see people come out and enjoy our shows makes it all so worthwhile,” Pauric added.

Having just released their new, original single ‘Love Me Now’, the band are looking toward 2020 for fans to hear their brand new EP. They are also preparing for big performances at many of the major summer festivals in which the Tyrone band always get a great reaction at. “Next year will be our third year headlining the Cheltenham Races Festival and it’s brilliant,” says Pauric. “There is such a great atmosphere at Cheltenham every year, we love performing there”.

But for now, All Folk’d Up are ending 2019 on a high. The band are getting ready to play Belfast’s Empire Music Hall on Thursday 19th December. In addition, Pauric says “there will be a few surprises on the night, some songs people might never have heard us perform before. We think that’s important to us – to change it up sometimes.” 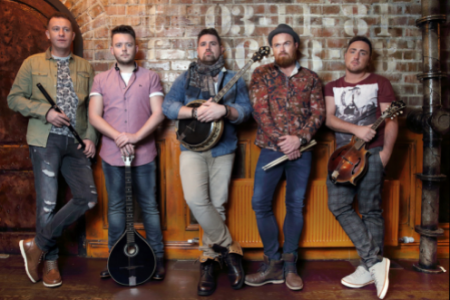